As laser manufacturers such as Crimson Trace and LaserMax grow in popularity, so does the demand for holsters that can accommodate guns with these lasers. Ready Holster is pleased to announce new holster designs that will satisfy the demand for these holsters.

Salt Lake City, UT (11, July 2011) --- Ready Holster saw the growing need for a holster for guns with lasers and now has holsters for the majority of laser equipped guns. Ready Holster plans to release these holsters within the week.

In a press conference held on June 30, Matthew Prestwich, President of Ready Holster, announced Ready Holster’s new line of holsters. “We have been working on this expansion for quite some time, and we now have the right fit for guns between 2” and 2.75” barrels with under barrel mounted lasers. As the popularity of tactical laser sights grew we saw that we would need to have a holster that would be able to accommodate them.”  Prestwich continued, “A conventional holster is not be able to fit these laser equipped guns. Most conventional holsters taper off at the end to provide a tight, secure fit for guns.  However once you attach a laser below the barrel of the gun it then becomes too big to be able to fit into a holster.  For example,  in order to fit, a holster for a Ruger LC9 with laser would need to have the bottom larger to accommodate the barrel plus the laser.  Our new line of holsters has extra width at the bottom to accommodate lasers of all kind.”

Ready Holster Vice President Rose Goncalves added, “Along with the new belt and clip side holsters we also have ankle holsters for the Smith & Wesson Bodyguard and guns of that size with a laser, including the Diamondback DB380 and Kel-Tec P-32.”  Goncalves continued, “In the future we hope to develop the perfect holster for laser equipped guns with 4-4.5 inch barrels. We are still working on the designs and we still have a couple of bugs to work out before we feel comfortable releasing them to the public.”

With their new expansion Ready Holster is particularly excited about their hip holster for S&W Bodyguard 380. “The Bodyguard is becoming a very popular gun and there are not very many options for somebody wanting a holster for it. Since the laser is built into the gun there is no other holster option except one that has been designed to hold a gun with a laser,” said Prestwich.  “We are glad that we can now provide both a side holster and an ankle holster for the Bodyguard.”

Additionally Ready Holster announces a holster for guns with lasers between 3” and 3.75” barrels. These holsters fit many guns like Subcompact Berretta Px4 Strom or the H&K P2000.  “We are really excited about our additional products.  Handguns with lasers are the future in firearm innovation and Ready Holster intends to work hand in hand with firearm and laser makers,” concluded Prestwich.

Ready Holster was started 2010 by Matthew Prestwich. He saw the growing need for holsters and has been rapidly expanding Ready Holster since its creation. 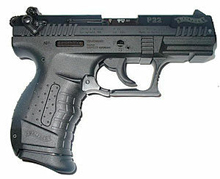